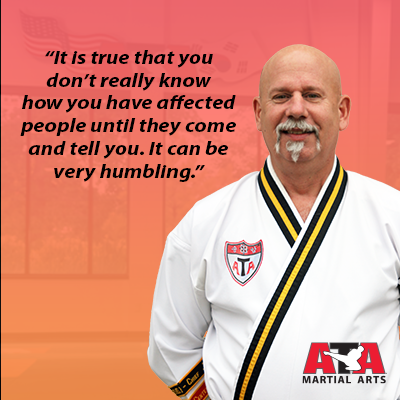 Hopefully everyone who attended the 2021 World Championships was able to enjoy the event!

There were a manner of special events and things that happened at this year’s World Championships—of those things was the return of Chief Master Jay Kohl to an active role in the ATA. For those who do not know Chief Master, here is a bit about him, his life in the ATA, and his return.

Chief Master Jay Kohl was born December 4, 1954. He began his journey in the ATA in January 1980 in Spirit Lake, Iowa under the instruction of Chief Master Larry Hoover. He also had the privilege of training with and testing under Grand Master Jager and Master Dale Craig.

In July of 1981, Chief Master Kohl earned his 1st Degree Black Belt, and a year later, he earned his Instructor Certification by testing in front of Grand Master Allemier and Master Dale Craig. In August of 1982, Chief Master Kohl attended his first National Instructor Camp; he went on to assume the Chief Instructor role at a Club in Windom, Minnesota. By 1983, he purchased an existing full-time school in Milwaukee, Wisconsin.

As a school owner and member of Region 102, he has held a number of important positions within the leadership of the Region. His list of Regional Officer positions includes Regional Chief of Awards, Regional Chief of Instruction, Regional Director and Regional Vice-President. In April of 1993, as a 5th Degree Black Belt, he received a job offer to work at ATA Headquarters as part of the Instruction Department under Grand Master M.K. Lee.

During his time as a member of ATA Staff he did not miss a beat as a competitor or in his efforts to better himself as a martial artist. He finished in the Top Ten every year during 4th & 5th Degree including two 3rd place finishes, one 2nd place finish, and one 1st place finish. Then came his “Year of Triumph”—or at least that is what his staff dubbed it—1997. He earned World Title in Men’s 5th Degree Division, Tested for 6th Degree, and was inducted in ATA Hall of Fame.

In 2011, Chief Master Kohl semi-retired from activity and left his position at ATA after over 18 years of service to the organization. He stayed in contact with many of his direct juniors, peers, and friends from his years in the ATA. In his own words,

“I remained on the sidelines, but never out of the game. I continued to attend World Championships and a few other events and I attended almost every World Championships for at least a couple of days and each time there were people who were genuinely happy and excited to see me.  “Are you coming back?” was a common question.  And the reality is, there was usually at least one person who would come talk to me and tell me about the impact I had had on their life, either directly or indirectly and how I was missed.  It is true that you don’t really know how you have affected people until they come an tell you.  It can be very humbling.”

While he was still semi-active and could be seen around World Championships and other events from time to time, his presence and leadership were missed by many. Then in June, everyone that is part of the ATA Forward Facebook Page began seeing posts that hinted at his return to active status. Those posts were a most welcome sight!

When asked about his return to being an active member his response was amazing.

“The reality is, the ATA and Songahm Taekwondo were never far from my thoughts or my heart. There were always the memories; most good, a few not so good, but when you have dedicated over 40 years of your life to something (January of 2020 was the 40 year mark), it doesn’t simply disappear. I always wished that there was something that I could do; to contribute; to be (at least) partially active. I had already accomplished a great deal but didn’t feel like I was done.”

As most now know, Chief Master Kohl is part of a new group of seniors focused on helping school owners who need extra support due to the pandemic and its effects on our organization. As the pandemic hit there were a lot of struggles and challenges on all levels within ATA. Chief Master Kohl—still wanting to help and support the organization—began adding an experienced, calming voice to the din on social media. That voice, the thank-you’s, and appreciation that followed his thoughts, got the attention of some of the Masters’ Council and ATA Headquarter staff. What followed is best described by Chief Master Kohl himself,

“I was approached with the concept of putting together a group of masters that would be available to offer their experience and insight to certified Instructors and Licensees who were needing extra support. Here was an opportunity to create something new; from scratch, to work side-by-side with other seniors that also wanted to be able to contribute to the organization, and to help without extra agendas. There is so much that this group can accomplish. It will grow in size over time and offer more widespread support that wasn’t available before. Eternal Grand Master H.U. Lee would say that the greatest asset of the ATA was its people. This group will utilize that asset.”

“Why now?  Because there is a role I can fill and a purpose to fulfill.”

Worlds will take place in Phoenix, AZ
July 11-17, 2022 at the Phoenix Convention Center.